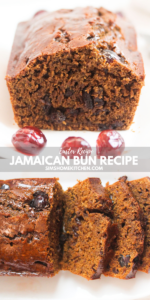 This flavorful Jamaican Easter bun is moist, sweet and filled with warming spices making it the perfect addition to any Easter menu. The main ingredients include flour, eggs, honey, Guinness, molasses, browning and raisins. Serve with hard cheese for a complete traditional Jamaican Easter treat.

This bun is rich, moist and delicious! Whenever I make it the smell of sweet molasses and Guinness fills up the house. As the Jamaican bun includes so many ingredients you will find that a lot of cooks have their own variations and personalize the bun to suit their taste. The most important thing is that you use the correct proportion of wet and dry ingredients to make the perfect dough.

Serve this tasty Easter bun with hard cheese, butter or plain during Easter or any time of year for breakfast.

How to Make Jamaican Easter Bun

1.First, preheat your oven to 170C/340F. In a clean bowl, whisk together the flour, baking powder, cinnamon, nutmeg and salt.

2. In another bowl, mix together the honey, Guinness, molasses, browning, melted butter, brown sugar and vanilla essence. Mix well until the brown sugar has completely dissolved.

5. Pour the batter into a greased or lined loaf tin and bake for 60 – 70 minutes or until a skewer inserted comes out clean. Baste the Jamaican bun with a mixture of honey and water.

6. Once the bun has cooled, remove it from the loaf tin and serve plain, with cheese, butter or tea for breakfast or as a snack.

What is Jamaican bun made of?

Jamaican bun is made of warm spices such as nutmeg and cinnamon, Guinness, brown sugar, honey molasses and egg. It has a deep, rich flavor and it is normally made in a loaf pan and served as slices and with hard cheese.

Why do Jamaicans eat Bun and Cheese for Easter?

Buns and cheese for Easter is a Jamaican tradition that dates back to the 1600s when the British colonized the Island. They brought a few of their traditions along with them and one of those traditions was eating hot cross buns for Good Friday.

Over time, the Jamaicans adapted this hot cross buns recipe to make their own version by adding molasses and raisins as well as baking it in a loaf pan.

Who brought bun to Jamaica?

The British brought the bun to Jamaica. It was originally the classic hot cross bun recipe when the British colonized Jamaica in the 1600s but with time the Jamaicans have adapted the recipe to make their own version.

What do Jamaicans eat on Easter?

Jamaican bun and cheese is a very popular dish made and eaten during the Easter season in Jamaica. The Jamaican bun is an adaptation of the British hot cross bun which was brought to Jamaica in the 1600s when the British colonized the Island.

Thanks for reading this recipe, comment below if you made this and let me know how it went! Follow @simshomekitchen on Instagram, take a photo, tag and hashtag it with @simshomekitchen. 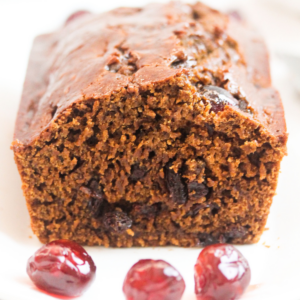 Sugar: Allow the sugar granules to disappear completely when mixing wet ingredients. The wet mixture should be smooth once you have finished mixing. Alternatives: Some variations of the Jamaican bun include guava jam, orange zest, lime zest and more. Alcohol-free: To make an alcohol-free Jamaican bun add malt instead of Guinness.

www.simshomekitchen.com is a participant in Amazon Services LLC Associated Program, an Affiliate Advertising Program designed to provide a means for sites to earn advertising fees by advertising and linking to amazon.com